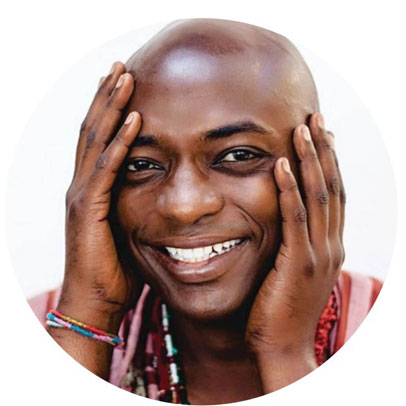 He acts as a mediator or bridge between the spiritual and physical planes, and applies ancient wisdom to help support success, happiness and healing in people’s lives.

Coming from a long lineage of African shaman and Norwegian healers and mystics, Shaman Durek has been practicing shamanism and connected to the spirit world since his childhood. His gifts and abilities were further opened after a near death experience. When he was 30, Shaman Durek experienced serious complications from an illness that left him clinically dead. Doctors at Hollywood Presbyterian Hospital feared he would be left with brain damage and paralysis. Dedicating himself to his recovery, Durek applied his knowledge of healing and the mind-body connection to his recuperation; and within a year, had recovered. For Durek, this experience was an expected part of his life’s work and journey as a Shaman.

He believes his life’s goal is “to teach people how to empower themselves by making spirituality more accessible, on a daily basis.”

Durek is based in Los Angeles but travels globally seeing people, and hosting retreats. His clients include CEOs, business and media leaders, royalty, and Gwyneth Paltrow.

To find out more about Shaman Durek or book a session with him: email kahli@kahli.life

Wake Up To Our Tips + Tricks